How to update and swap values using a query in mySQL 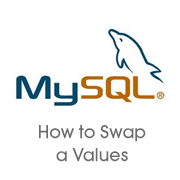 While Im working on a certain project, I encounter a situation where I accidentally interchange the first name and the last name. Since the entries are quite big, It’s very hard to manually swap the values one by one. So, I search the web and found out the used of temporary variable in a query. Temporary variable in a query always start with an @ symbol followed by its variable name, then := to set a value.

Above is the final output of the solution, where the first name and last name swap successfully. Obviously there are other way to do it and you can freely share it using comment! Thank you!