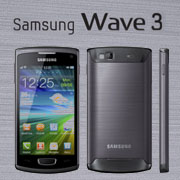 Samsung Wave 3 is now available in Gensan and it cost around PHP 18,999 it was released officially last October 2011. The Phone OS is powered by BADA 2.0, the camera is a 5.0 megapixel and has a built in flash, the display screen is a SUPER AMOLED, 4gb internal memory and a 1.4Ghz Processor. Built in applications on the phone are the ChatOn, Polaris Office, Google, Youtube, Yahoo Messenger, Social Hub, Java, GPS Navigation, Dolfin Browser, AllShare, Caster and Voice Commands. Unlike the popular iPhone Application and Android Application, Bada OS has its own new platform, and some of the biggest application developer less prioritize the Bada, that is why the applications “Fruit Ninja”, “Angry Bird”, and other popular apps are not presently available on Bada, then only rare update you can found on the application. But who knows those developer may extend their product visibility to Bada OS and it would be competitive like the Android and iPhone. Some of the available applications you can download from Samsung Apps are the Facebook Bada Application, Twitter Bada Application, converted games of Gameloft and other top apps. You can also play Java Games on Samsung Wave 3. Below are some screenshot taken from Samsung Wave 3.

One of the advantages of Samsung Wave 3 is their super clear cameras, they perfectly implement the focus function of a DSLR cameras and flash that uses enough light to capture in dark images. How to Take Screenshot on Samsung Wave 3
Hold first the Home button then press the Power button.

How to open Task Manager
Hold the Power button for 1 to 2 seconds.