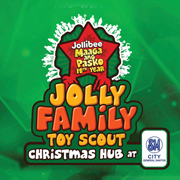 On October 27, 2012. I got a chance to join and witness the 18th Maaga ang Pasko at the Activity Center of SM, General Santos City. The primary goal of this program is to give a chance for those less fortunate kids a brighter Christmas. This is to call all generals to donate their old toys and books and touch the lives of children in need. During the event, the 2012 batch of Jolly Family Toy Scouts from General Santos were inducted, committing to making the 18th year of the toy and book drive a bigger success. Jollibee’s regional business unit of Mindanao led the symbolic hanging of commitments on the Maaga ang Pasko Christmas tree and starting off this year’s toy and book donations.

A variety of fun games, family themed booths, a magic shows, were also set up at the launch and with the Kapuso Star Julie Anne San Jose, allowing participants and mall goers to enjoy the time with their families while contributing to the campaign. All they had to do was to present old or new toys and books for in exchange of tickets to join in on the fun. This year’s campaign doesn’t stop there, they also launch an events in four other key cities including Metro Manila, Bacolod, Calamba and Tarlac. So what are you waiting for, drop your old toys and books at your nearest Jollibee store and become one of the Jolly Family Toy Scout.

Especial thanks to Kezia Chretien for inviting us on the events.

Previous Posts How to Protect your Site from Being Hacked
Next Posts Encrypt your SWF for FREE with SWFlock.com