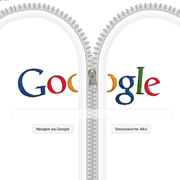 Gideon Sundback is the inventor of zipper, an Swedish American electrical engineer from Sweden. Gideon started his work in a Manufacturing Company in Pittsburgh, Pennsylvania as Engineer and later hired to work under Universal Fastener Company in Hoboken, New Jersey. From their, he made several advanced development of zipper and come up with his final invention the “Separable Fastener” or “zipper”, he patented his work in 1917 as “Separable Fastener”.

Then on 1923, Benjamin Franklin Goldrich name the patented work of Gideon as “Zipper”, who used the zipper device for their new boots. Initially zipper primary use on Boots and Tabacco pouches. And almost took 20 years, before it discover that it can be apply to dresses and in fashion industry.

Today Google just created a very interactive Doodle Logo made in HTML5. You can check the live logo below: